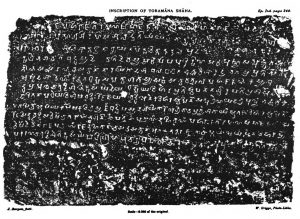 IN00101 Khurā (Urdu: كهُوڑه‎) Inscription of the the Alchon Hūṇa king Toramāṇa recording the gift (deyadharma) of a Buddhist monastery (vihāra) to the Mahīśāsaka school.

In the prosperous reign of the king of kings, the great king Toramâṇa Shâhi Jaû-; in the…. th year, on the second (lunar day) of the bright half of the month of Mârgaśiras. Under the ….. Nakshatra, which is propitious for pure, tranquil meditation, study and reflection on salvation ……. This appropriate and meritorious gift, the erection of a Vihâra for the congregation of the monks of divine Buddha, the god of gods, freed from all sin and endowed with all holiness, the saviour of beings that have crossed the ocean of births, who possesses the power of the ten powers, who has attained the four subjects of confidence, the four analytical sciences, the eighteen independent conditions, the supernatural condition, who cherishes all creatures and is most compassionate,—of which (congregation) Buddha is the chief and which comes from the four quarters of the world,—(has been made) by the virtuous son of Roṭṭa-Jayavṛîdḍhi, the lord of many Vihâras, whose name, praised and honoured by the lord of Naśchîra, (indicates &) particularly (great) prosperity.

Whatever merit (there is) in this (act), may it be for the attainment of supreme knowledge by (my) parents, the instructors of Jambûdvîpa that is famous for nurses and nourishers,—(their) share being a preferential one,— moreover by all the brothers, sisters, wives, sons and daughters of the lord of the Vihâra Roṭa-Siddhavṛiddhi, by all the queens, princes and princesses of the great king Toramâṇa Shâha Jaûvla (and) by all creatures. But this benefaction by a Vihâra (is) for the congregation of the monks of the four quarters, for the acceptance of the teachers, the Mahîśâsakas. By the son of Sâddhaka……………………………………………………………..