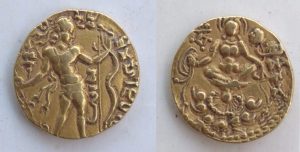 This inscription is engraved on a thin gold plate, said to have been discovered – along with other minor antiquities – beneath the foundation of an ancient structure on the lank belonging to the Viṣṇu temple at Vallipuram, a village in the Jaffna District, in or about 1936. On palaeographic grounds, the record can be assigned to the second century A.D. It is dated in the reign of King Vaha and records the establishment of a vihara at a place called Badakara-atana by an individual named Piyaguka Tisa when the Minister Isigiraya was the governor of Nakadiva (Nāgadīpa). The king’s name, written as ‘Vaha’, is probably meant for ‘Vahaba’ (Vasabha), whose reign lasted approximately from 126 to 170 A.D.

Senarath Paranavitana edited and translated the inscription in 1939 (Epigraphia Zeylanica 4, pp. 229–237). However, his translation proved immensely controversial and the plate was drawn into the ethnic conflict in Sri Lanka. Paranavitana described the language of the plate as Siṅhala Prākṛt, which he calls “old Sinhalese”, but subsequent scholars have suggested that it can be read as Prākṛt with a Tamiḻ substratum (Vēluppiḷḷai 1990: 10–42), Prākṛtised Tamiḻ (Nāgacāmi 1994: 220–222) and Paiśāci-Prākṛt (Schalk 1996: 306). Since the text is so short, one can argue for all four possibilities. As Schalk points out, the determination of the language is open to political exploitation, since the different linguistic possibilities can be used to redraw the ethnic identity of the Vallipuram area. If the language is Siṅhala, the inscription can be framed as evidence of a Siṅhala Buddhist tradition in the region, which rationalises Siṅhala settlements in Tamiḻ areas. By contrast, if the language is Prākṛt with a Tamiḻ substratum or Prākṛtised Tamiḻ, it can be mobilised to support the case for autonomous Tamiḻ administration. Hence the inscription was often the subject of what Schalk calls “interested” historical writings during the civil war period (Schalk 1996: 308).