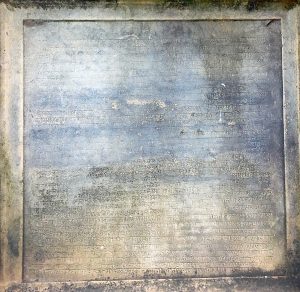 INIG1535a Singhpur (Ashoknagar). Inscription in the Rājmatī stepwell recording the construction of the stepwell by Rājamatī, the daughter of Bhairavadāsa who was the son of Uvāra, the son of Chajjala of Sirohanagara. Gives the details of the gifts and donations made to Rājamatī by several rulers, namely Sher Khān of Chanderi, Ghiyās al-Dīn of Māḍai (i.e. Ghiyāth al-Dīn of Māndū, reg. 1469-1500), Husayn Shāh (reg. 1458-79) of Jauṇapura (i.e. Jaunpur), Barbak Shāh (reg. 1459–74) of Pandua, Sultān (name not given) of Ḍhili (i.e. Delhi), Tughluq Shāh of Thatta [presumably a reference to Jam Tughluq (d. 1442) of the Samma dynasty],  Qutb al-Din of Gujarāt [presumably Qutb al-Dīn being applied anachronistically to Maḥmūd Begada, reg. 1458-1511], the Bahmani Sultān (name not given) of Vidara (i.e. Bidar). Also mentions Rājamatī’s son named Rāmacandra who was a mahākavi and a favourite (?) of Ghiyās al-Dīn and Nāsir al-Dīn. The pradhāna was Devidāsa and the masons were Vu(Bu)rahāmatasuṣu(khu), Mūla and others. The writer was Guṇasudara.

L. 1-2) Krishna in his incarnation, as (Ranganatha) and who causes delight to the hosts of God and who is seen as a lofty mountain by the wrestlers, as a child by others, as Kamadeva by women, as cowherd by the common folk, as one who encampases the entire Universe by the thunderbolt-bearing Indra, as the angry Death  by Kamsa with eyes tremulous with fear, as one [who] is worthy to be meditated upon by  the Yogis, may [he] protext [sic] us with application.

L. 3-4) Vinayaka, who removes obstacle which are like elephant (or, who is just like an elephant in the removal of obstacles); the leader of the Ganas and the worlds, May [he] show prosperity to all of you.

L. 4-5) Indeed the city of Siroha looks marvellous in the day also, by the rise of the disc of the moon in the shape of women’s, delightful with stars in the shape of clear and tremulous pupils of eyes. In that city Chajjala was born who, like lndra, is worshipped by the infinite group of bards.

L. 5-6) Fame of that Chajjala is like a head of camphor increasing everyday in all directions, which are like the fragrant faces of women, This heap of camphor, lofty like the Himalaya is seen with uplifted necks by the Diggajas, whose foreheads are covered with pure and radiant pearls … and whose eye are half closed sportively.

L. 6-7) A noble-minded son was born named Uvara. After listening to his speech learned men have no desire for nector [sic]. His son was named Bhairava. He achieved perfection through adoration of Sri Bhairava.   He is the sole treasure of all virtues, the [sic] beame the friend of earth, cows and kings.

L. 8-9) Who having left his house and wealth of his father, obtained through  the power of his learning the Gurjara country, filled eagerness towards the sport of nearby elephants, and the wealth, shining with the lustre of gold, given by that king (of Gurjara). This meritorious one made the place of pilgrimage equal (?) to Brahmins (filled the place of pilgrimage with Brahmins?)

L. 10) His daughter (born) through the good fortune of his policies ….the moon faced one shining among her family member who are white lotuses, is known by the name of Rajamati, who, like moon light makes… white.

L. 11) She is like Sarasvati, and her face is as autumnal moon [sic], welling place of good virtues … Ghiyasdin … through her speech, made white (pure) by nectar obtained the earth, which was protected by the host (army) of irresistible elephants…

L. 11-12) In whose house each morning the supplicants having obtained all wealth along with respect, and (thus) having accomplished (their) desires, return to their houses. May she whose life is pure as Ganga, who is always praised by the kings, who is capable of doing all favours, be victorious for long time.

L. 13 This step-well, (Vapika) caused to be made by her, which removes with its water the traveller’s thirst, which gives the pleasure of the essence of nectar, which is filled with the mass of delight of (all) the eyes of the world, is resplendent on this earth.

L. 14) Having invited eminent Brahmins (here) from different countries through vedic syllabes she caused to be made, on the sacred bank of the pond close by, a golden weighing balance and gave immedately to the Brahmins this beautiful balance which produces wealth according to the supplicants.

L. 15-16) Every day the moon, defeated by the faces of women of Gaminlu (?) the faces … which contained eye collyrum, takes a dip at night in the water of that step-well under the pretext of getting himself reflected in it, in order to wash himself thoroughly, Whom does that vast step-well not purify now. (Sanskrit text ends here: dialect begins).

L. 18) His daughter’s name was Rajmati, who was clever, beautiful, fortunate, a scholar and fostered with love and endearment.

L. 19) Several eminent persons came at Chanderi. From the eirs [sic] suggestions Sher Khan Mukta (muqta) made that royal temple and house as well as a garden and tank etc. Sher Khan had great sympathy for her. Rajmati requested him and (Sher Khan was) pleased (to do so).

L. 20-21) ……The fortunate Sultan Ghiyasuddin of Mandoai (Mandu) conferred this gift with several gems and pearls with a palanquin. Fierce … (people were) also pleased after describing…his fame. The august Sultan Hussain Sahi of Jaunpur

L. 24) The fortunate Qutubuddin of Gujarat gave diamonds, geme [sic] and a whole mine with a palanquin, several pearls and gold with horses.

L. 25) The king of Bidar, the fortunate Sultan of Bahamani, gave many gifts and things with one lakh tankas… pious and religious…

L. 26-27) Th names of his family are as follows — father Bhairavadas, mother Manika, two sisters, Bhanmati (and Rajmati), one brother Dasu and niece Damyanti … collected their own money.

L. 28) Rajmati Bhatini has a worthy son, named Ram Chandra, who possess [sic] good qualities, meritorious virtues, a brother for other women and devotee of mother and father, and a Mahakavi (great poet); and (who) got the favour from Sultan Ghiyasuddin Sahi and Nasiruddin Sahi.

L. 33-34)… in Samvat year 1535 on the fifth day of the bright half of Magh, in winter, Rajmati Bhatini has constructed this step-well (Vapika). May prosperous.